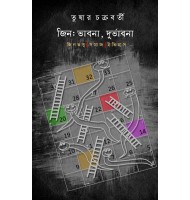 The term ,“jaibanik”, literally meaning “biological”, was coined and used by Bankim Chandra Chattopadhyay in his book of scientific essays , Bigyan Rahashyo . In Bigyan Rahashyo , Bankim pioneered a tradition of critical and cross-cultural scrutiny of modern science which is unfortunately being ignored or sidetracked both by the Bankim scholars as well as the general readers today . This has created a major lacunae not only in Bankim- studies but also in the studies of Bangal intellectual tradition . On the 175th anniversary of Bankimchandra , this book , which is an unique combination of History of Science and frontiers of Science , pays a small and a bit late tribute to Bankim . Essays included here revisits some of the scientific problems Bankim commented upon in Bigyan Rahashyo in his time , and records current advances in those areas . The Areas include current hot biological topics such as Synthetic Biology and Metabolomics
Additional Information